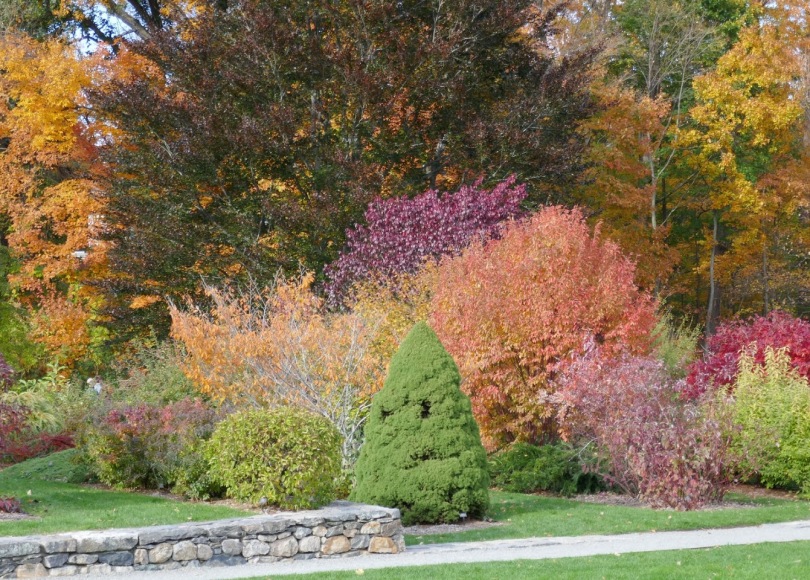 Did you know that the Arnold Arboretum is home to some 16,000 specimen plants cared for by only four arborists? Or that the Dawn Redwood, the emblem of this “living museum,” is considered to be a living fossil, once thought to be extinct? (The arb is home to some 200 of these beauties.)

On a Saturday in late October, NESW members learned these facts and much more in a great tour led by Brad McGrath, a docent at the arb.

“We had a gorgeous fall day and a very enthusiastic, knowledgeable guide. About a dozen of us strolled past many kinds of trees and learned a lot about what does well in what conditions, and the history of the arboretum,” said Richard Saltus, a senior science writer at the Dana-Farber Cancer Institute.

Among those trees and shrubs: an Amur Cork Tree that was a gift from the czar of Russia; the Paperbark Maple, a favorite of many arb employees, including Brad; and the oldest documented Franklinia, otherwise known as the Ben Franklin tree (it was named after Franklin, who according to Wikipedia was a great friend of the discoverer’s father).

Brad also shared many great tips about growing trees and learning more about them. For example, he noted that you don’t have to plant large, older trees; smaller, younger ones will quickly catch up in height and vigor.

If you’d like to learn more about a specific plant, make sure to check out the information on its metal tag. Also consult the Arboretum Explorer, an interactive map that can be accessed from your laptop or your phone’s browser. Type in the plant’s ID number or name, and you can find its exact location in the arb, when it was planted, growing conditions, and much more.

NESW plans to offer this tour again, perhaps twice a year to take advantage of the seasons. Watch the NESW listserv or our Facebook page for updates.

Keep up with NESW